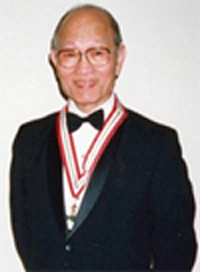 Sim Fai Liu was born in Canton, China, the eldest of six brothers. His father was a respected physician and at an early age, Sim Fai decided to continue the medical tradition by studying medicine. He attended Pui Ching Middle School and then attended medical school at Shanghai Medical College, graduating in 1944. He pursued postgraduate medical training in Internal Medicine at Edinburgh University, the London School of Tropical Medicine and Hygiene, University of London, England, Victoria Hospital, London, Ontario and the Jewish General Hospital in Montreal. He opened his practice in Internal Medicine and Geriatrics in 1954 and joined the staff of the Toronto Western Hospital in 1955. His practice bridged the Chinese and English-speaking communities in Toronto, with offices on St. Clair Avenue and Dundas Street. In 1958, at the invitation of Dr. W.W. Priddle, Dr. Liu joined the staff of the Provincial Geriatric Study Centre in Toronto, where he participated in innovative research to improve the quality of care for seniors in the nursing home setting. In 1972 he was appointed as the medical director of Lambert Lodge. Lambert Lodge eventually grew to become Castleview Wychwood Towers a Metro Home for the Aged where he continued as medical director until 1986.

He served in the military, both in China and Canada, as a member of the Red Cross Surgical Team during the Sino-Japanese war and as a as a Captain in the Canadian Army Medical Corps (1961 to 1965).

Fai was a dedicated family man. He shared his love for travel and the pursuit of knowledge with his wife, Edith, and four children. His daughter, Barbara, has continued in the Liu family medical tradition, training as an internist and geriatrician, and continuing to serve the community’s vulnerable senior population.

Dr. Liu’s proudest achievement was the ongoing growth of the Mon Sheong Foundation and its Home for the Aged. Together with like-minded associates, Dr. Liu founded this first ever Chinese Canadian charity in 1964. After developing a series of Chinese schools and a youth group, the Foundation opened its first Home for the Aged in 1975. In June 1997, Dr. Liu was proud to host Her Majesty the Queen on the occasion of the laying of the foundation stone for the new addition to the Home. His dedicated service to the community has been recognized by numerous awards and appointments; including the Centennial Medal, Volunteer of the Year Award, Citizen of the Year Award, International Year of Older persons Award and one of the Ten Outstanding Overseas Chinese by Xinhua News. He was the first Chinese Canadian to receive the prestigious Gardiner Award and Order of Ontario.